I recently Installed Server 2011 R2 on a server, after the installation was complete, it would hang on the shutdown screen.  I went and checked the basic drivers, all where up to date , checked the BIOS, it was up to date too.

I went looking and found this answers:

After that I went and scheduled a Check disk, in case it was an issue with my hard drives.  During the check disk, this files where found in a bad cluster:

Unfortunately that didn’t fixed my issue, after a lot of research, I went and dropped the case and called it off.

After a long stay on the shelf, I went and give it another try.  This Intel motherboard has a build in RAID, and 6 SATA ports.  I went and removed one drive that I had setup in a mirror RAID.  After removing the second drive, the system powered off, and no frozen “Shutting down…” screen.

After pulling all my hair and cooling off, I went and connected the second drive.  Again the frozen “Shutting down…” came up.

Setting up a Mirror RAID boot drive, with a build in RAID controller might not be a good idea.  What will happen if the Hard Drive controller goes bad? The system will not boot.

I believe that if there is a need to setup a Mirror RAID on the boot drive, a RAID Card should be used.  That way if the raid card goes bad, then simply pull out the card and put the drive on the regular SATA port and let it boot.  In this case i believe that it could have been the motherboard, its ether going bad or its already bad. 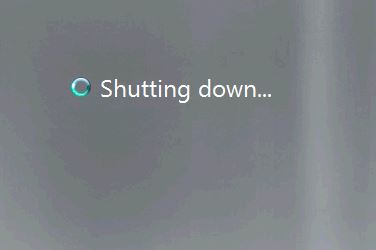 Last update on May 1, 2014
Published April 30, 2014
Author: Samuel
Categories: Windows
Tags: There are no tags for this post