Yesterday I had a friend asked me to download some music on his iPod classic. This iPod looks like its been through difficult times. It has signs that it was dropped at least once, a while ago. 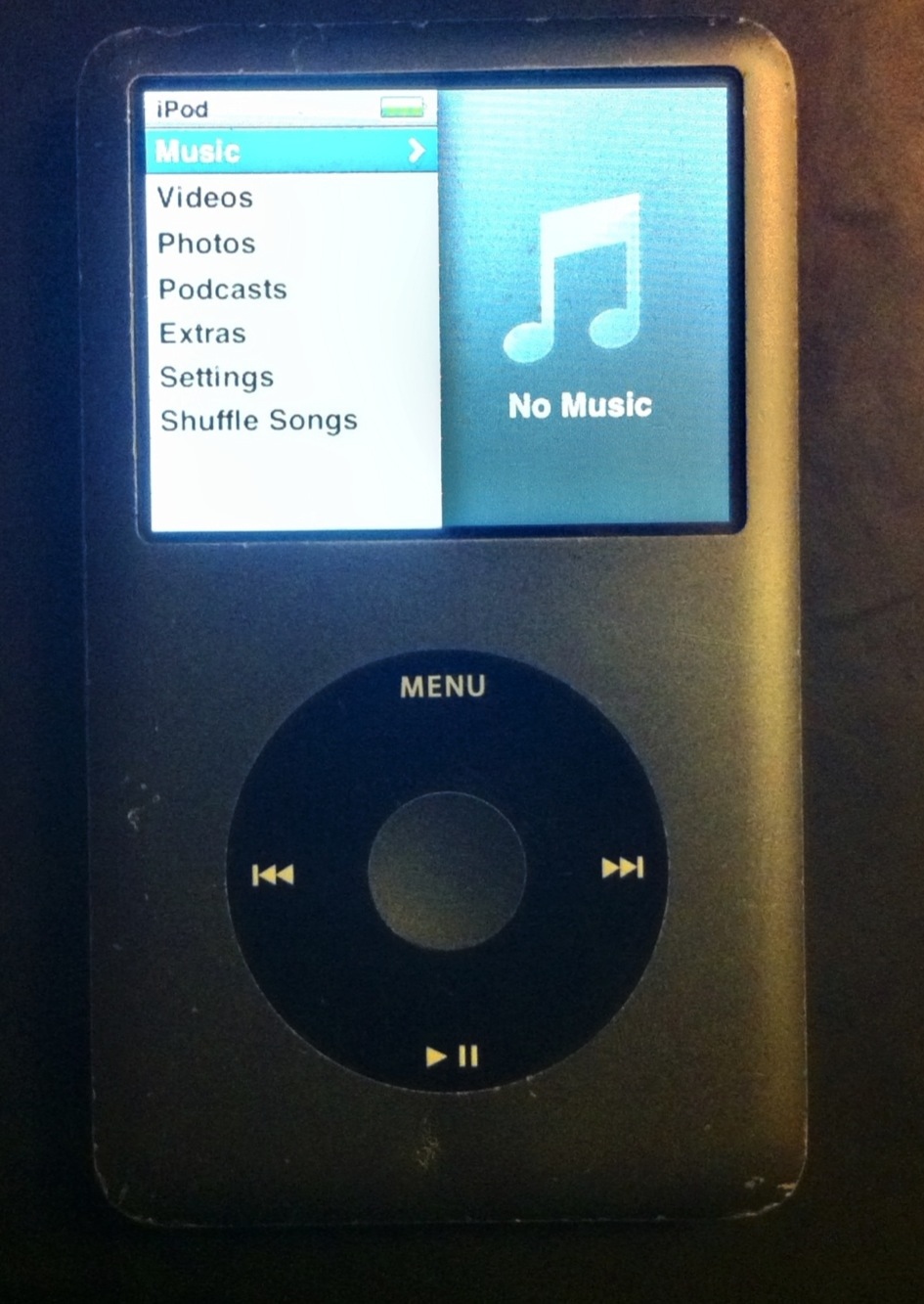 I went and connected the iPod to my computer. The moment I connected it to my computer, windows went online to look for drivers for it. After the installation, my antivirus program came up and said that it had detected a virus on this iPod. from that moment on, I realized that this was going to be a little more difficult than just a simple copy and paste.

iTunes said that this iPod belonged to another user. After i restored it, it appeared on iTunes again. I continued with the setup. I went and synced all my music to it. After the sync started, iTunes give me an error saying that:

“iTunes was unable to sync, because the device could not be found!”

I unplugged it from the computer, because it was not appearing on iTunes .
I plugged it back again, and I was able to sync one album. After that I went and tried to sync my entire library of music, about 6.5 Gigs. After it was finished with the sync, I ejected it from iTunes.

I went and physically unplugged it from the USB port. I went and looked to play some songs on it. For some reason, it said that there was:

After doing a restore and coping one album again, I was able to see the album there. But after I copied my entire library, the music disappeared.

I had never encounter a issue like this before! 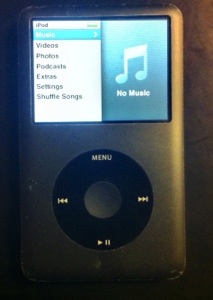 After doing some research, I found out how to access the iPod Diagnostics.
thanks to this post,

To access the iPod diagnostics, do a manual reset:

iPod reset: hold the center and the menu buttons.

A screen similar to this, will appear: 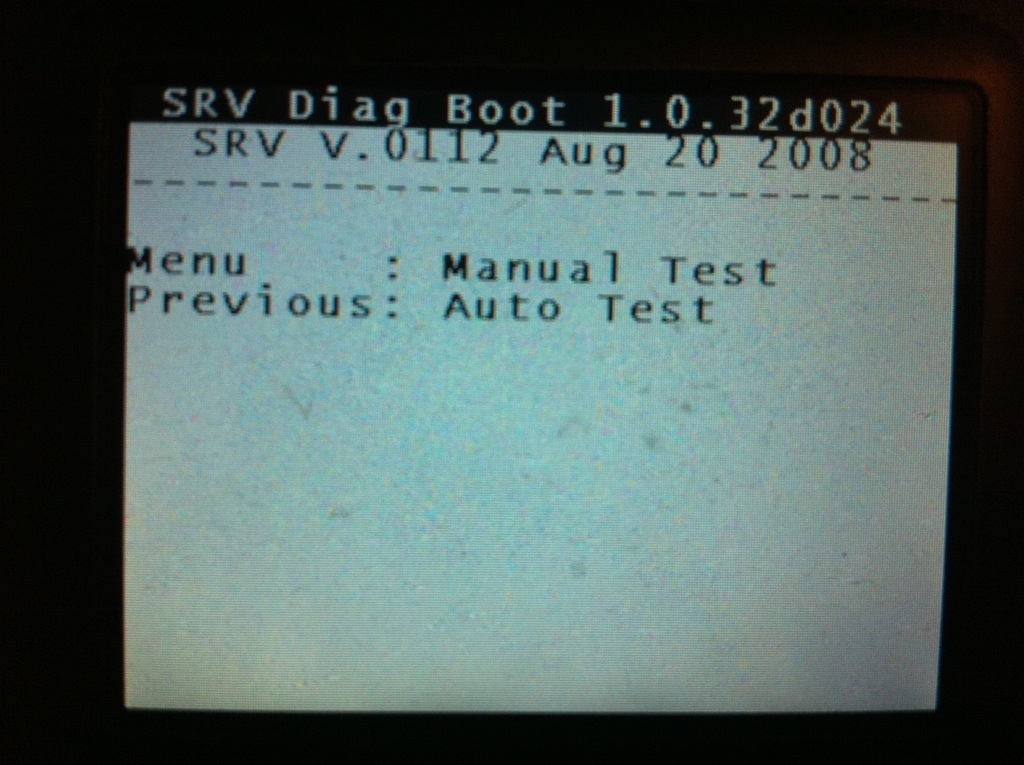 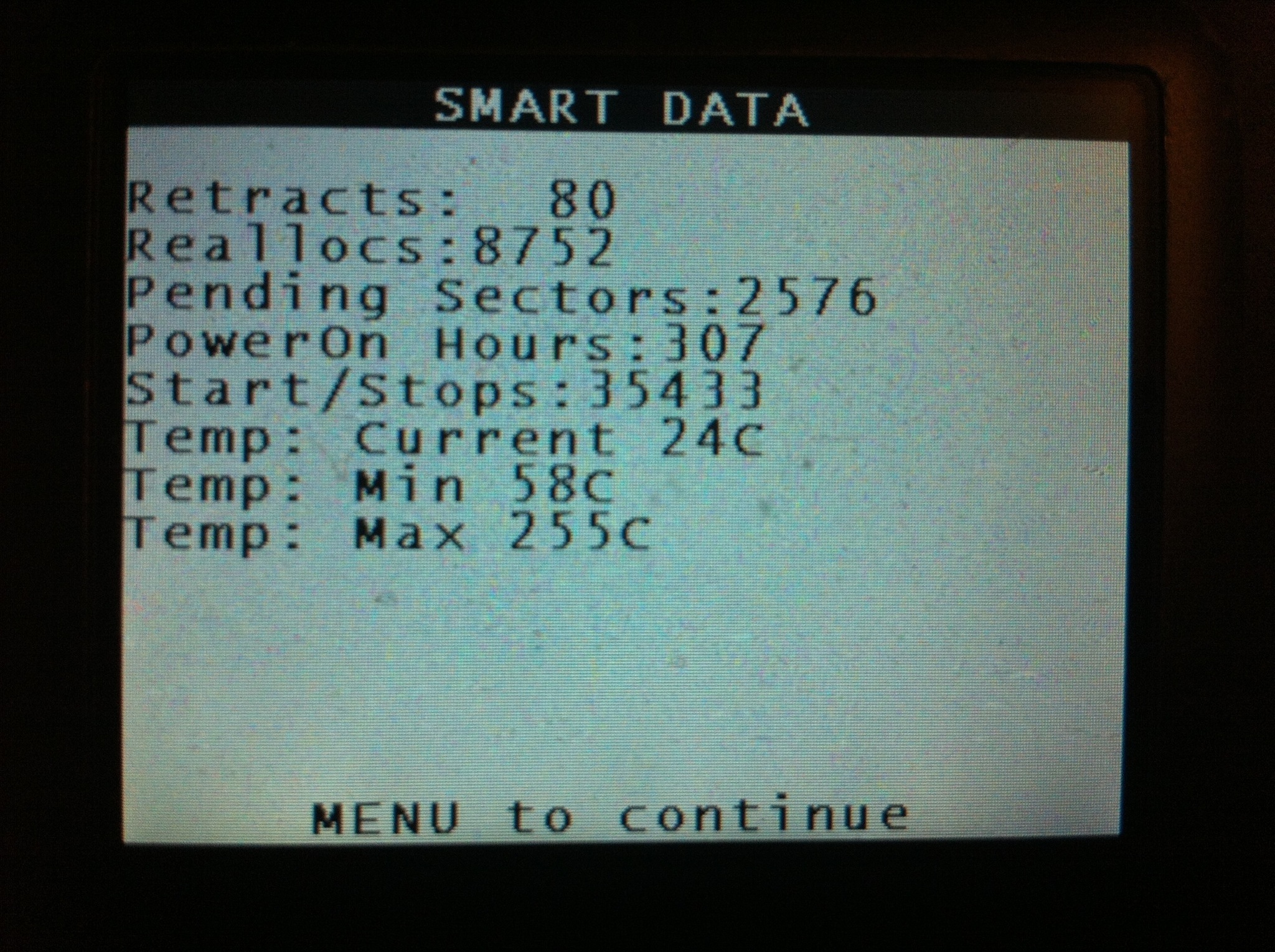 With my previous experience as a computer technician, I came to realized that this are the results of a chkdsk /f for those with command line background.
As far as I found out, this drive automatically does a check disk on the go. Any bad sector that it finds, get relocated to another area of the disk.

Knowing this information, I have come to believe that this Hard Drive has its days counted! With so many reallocations and so many pending, it’s not good news. But with a regular 120Gb hard drive housing 234,375,000 sectors, there’s still hope.

After this I went and rebooted the iPod, and went back to the no music.
After that I connected it to the computer, after it came up in iTunes, I did a Restore iPod.

After the restore, it appeared on iTunes.
Then went and started adding between 10 to 25 albums at every sync session.

After the sync was completed, I left the iPod alone for about an hour.

After this I went through the albums, and all the songs just trying to give a little work to the hard drive, and maybe find more bad sectors.
After doing this 3 times I went back to the iPod Diagnostics to see what was the effect.
This is what I got: 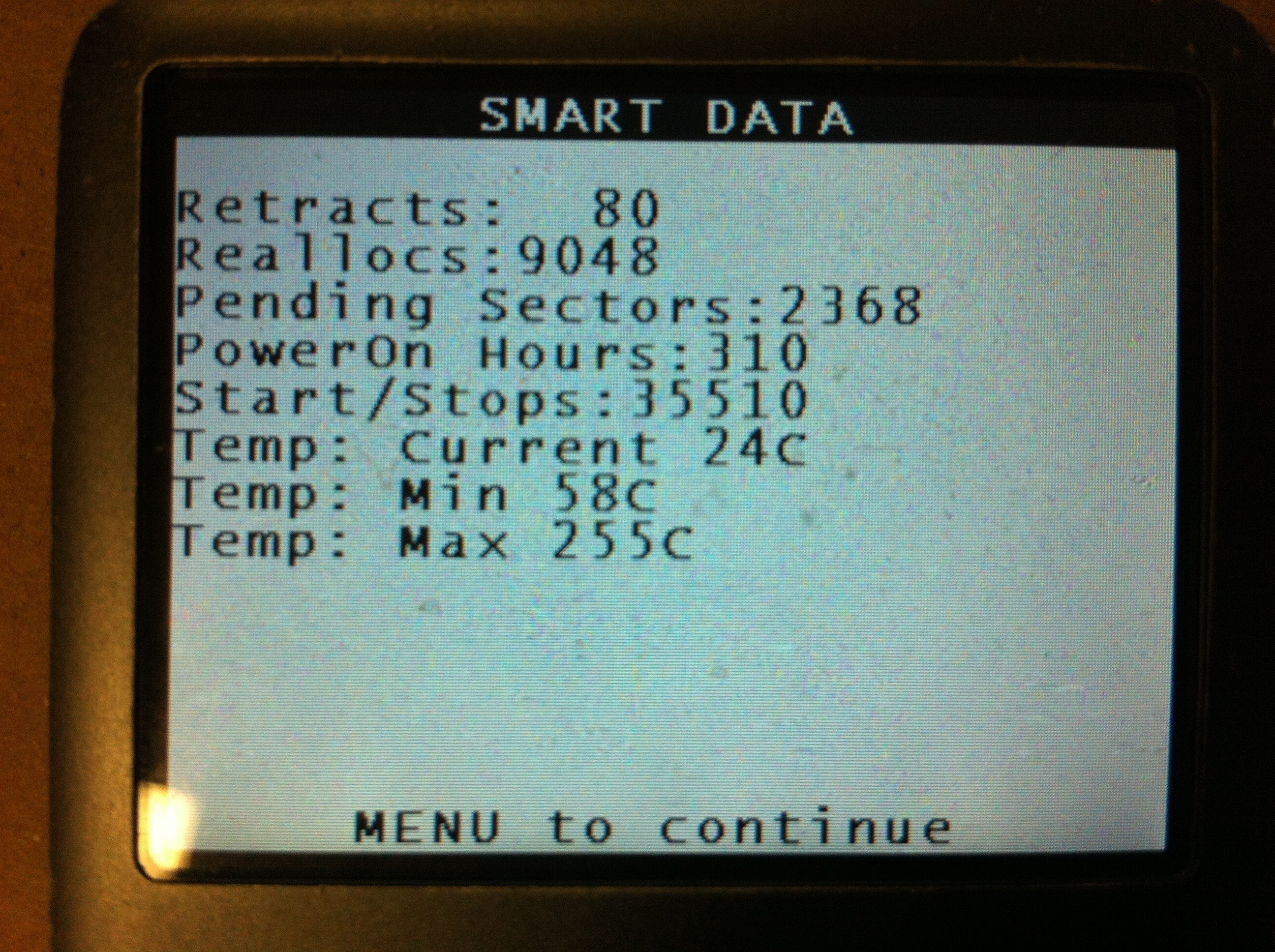 The iPod seems to be fixing it self. After adding more songs, the unthinkable happened the no music appears.

After this disappointment I plugged it in and went to Computer Management and right clicked the drive and selected Format from the menu. 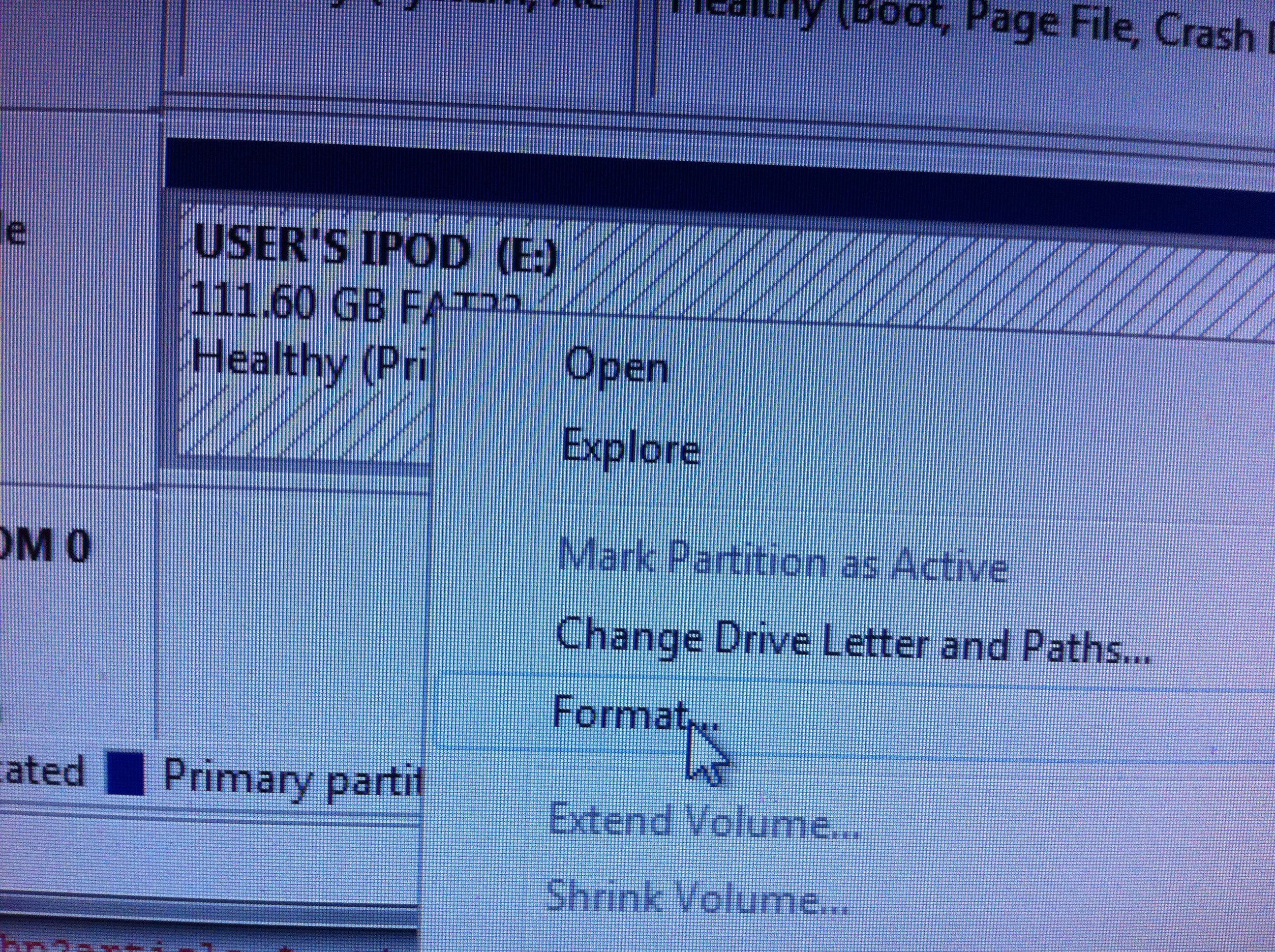 Unchecked the Perform a quick format check box and went for it!
After about two hours, the format was complete.
After the format was done, I was curious to see what the SMART results were, here they are: 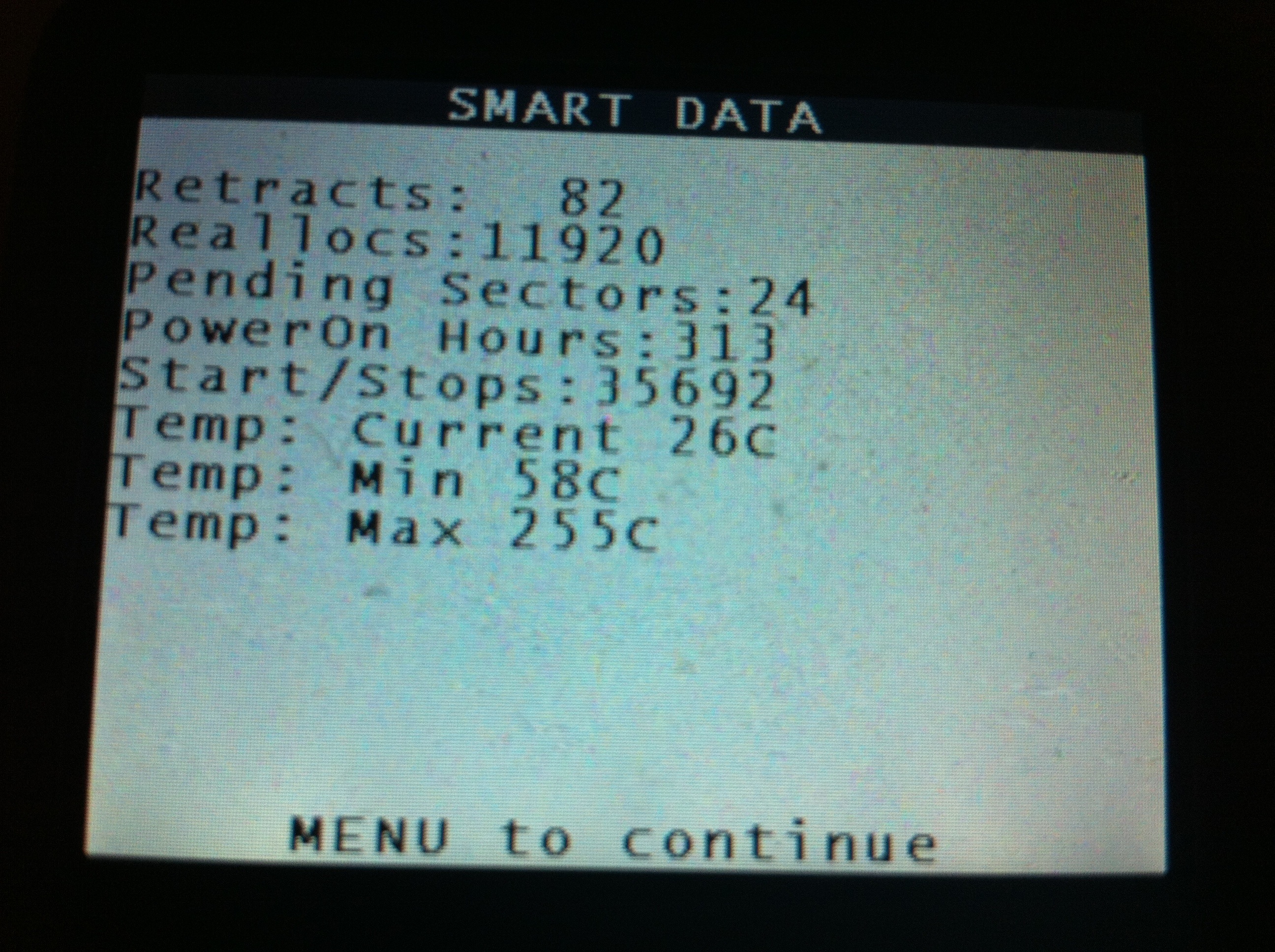 I was really pleased with windows and the format.
Now all I have to do is to add songs, just to be safe, ill add them 200 songs at the time.

After adding 490 songs, the iPod is still functioning! Awesome!!!!
After i have it running for about 1 hour, I will add another 400 to see how it does!

I ended up adding 410 more songs, after the reboot, again the no music.
I went to the Diagnostics mode, to see what the numbers where. So far the pending sectors increased from 24, to 152. So something is going on,

After the reboot, I was able to see all my music!!!! I can see the bad sectors are being fixed??? Maybe.

After trying to add more music, the no music appeared again. I decided one thing, to sync only 500 songs.

After all this trouble, I was only able to sync 480 songs to this iPod. The hard drive on this iPod is just about to die. I think that some music, is better than none at all. 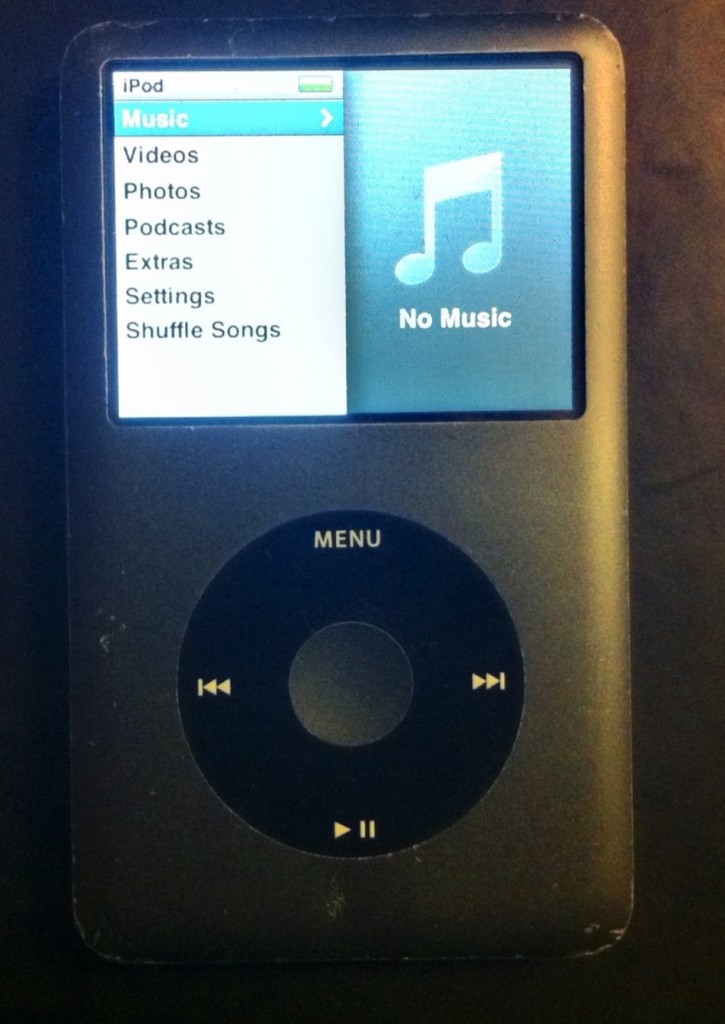